For the opening of their November 2018 solo show at the Station Museum in Houston, Texas, Cassils invited three other artists to collaborate on Solution, a live performance and sculptural video installation that reinterprets and expands Tiresias.

Cassils collaborated with Rafa Esparza, Keijaun Thomas, and Fanna, artists whose subject positions differ but whose civil rights are all being eroded under the current US administration. Each artist conceived of a performance action in which they melt an ice sculpture of a symbol of their choice with their bodies. Following the opening performance, videos of these performances are installed to formally reference the classical sculptures of divine figures found in temples of worship.

This collaborative work poses the following question: What if the constitutional right to religious freedom were invoked to protect a religion where our deities were brown people, Muslims, women and queers? What if to harm such a body was framed, not as the quotidian victim of police brutality, xenophobia or transphobia but as an act of religious persecution: would the sanctity of our lives finally be given value? 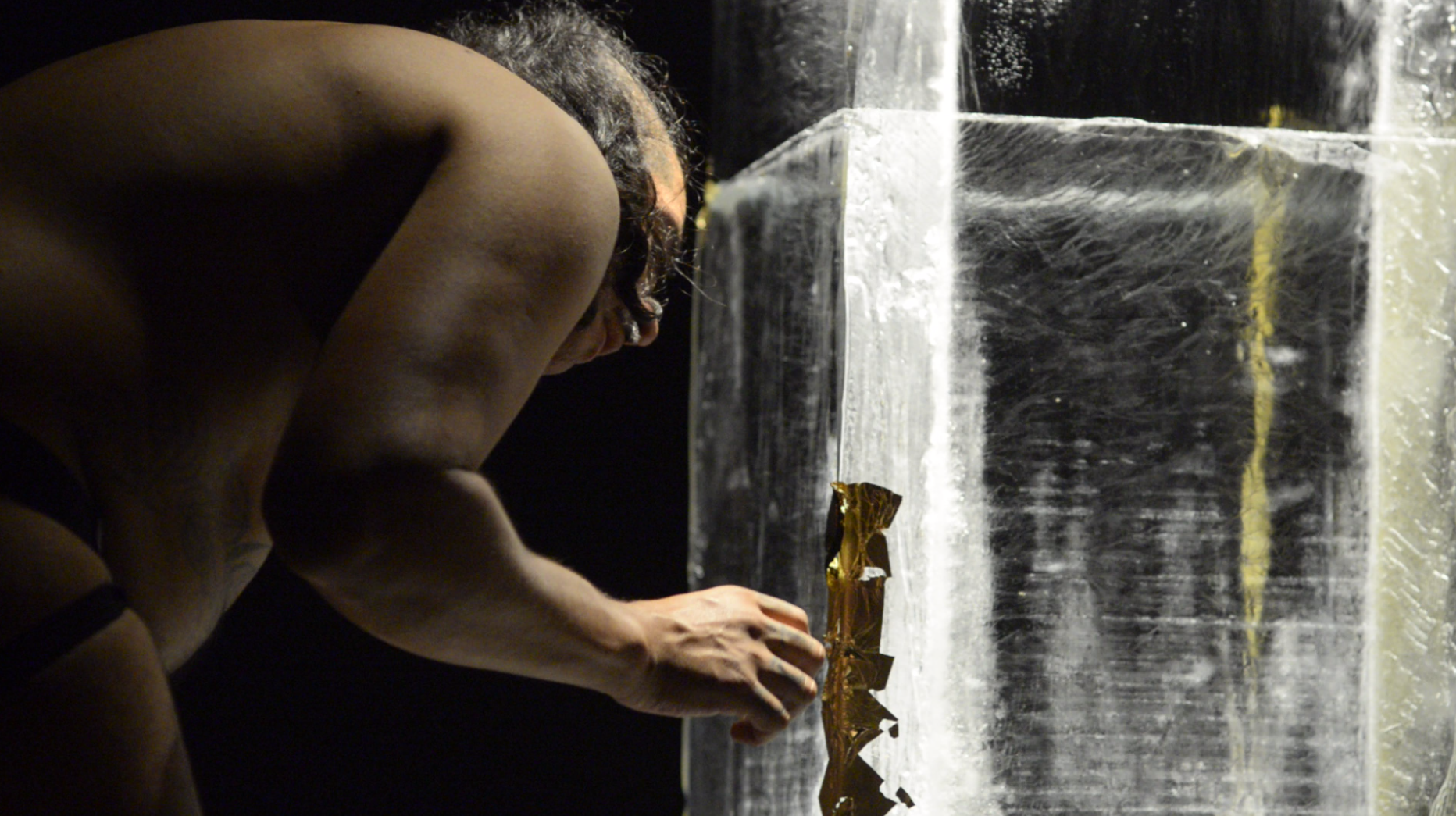 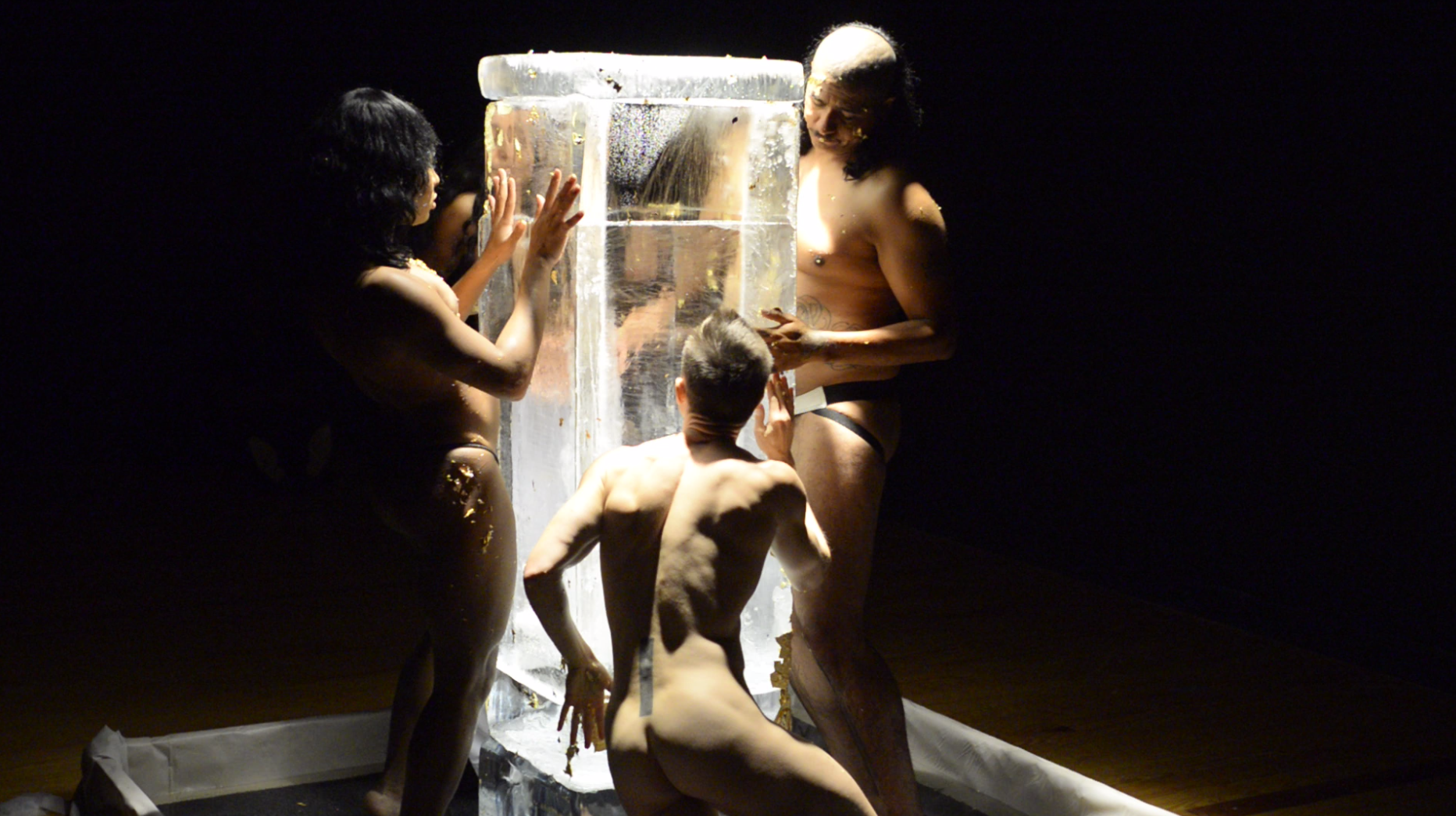 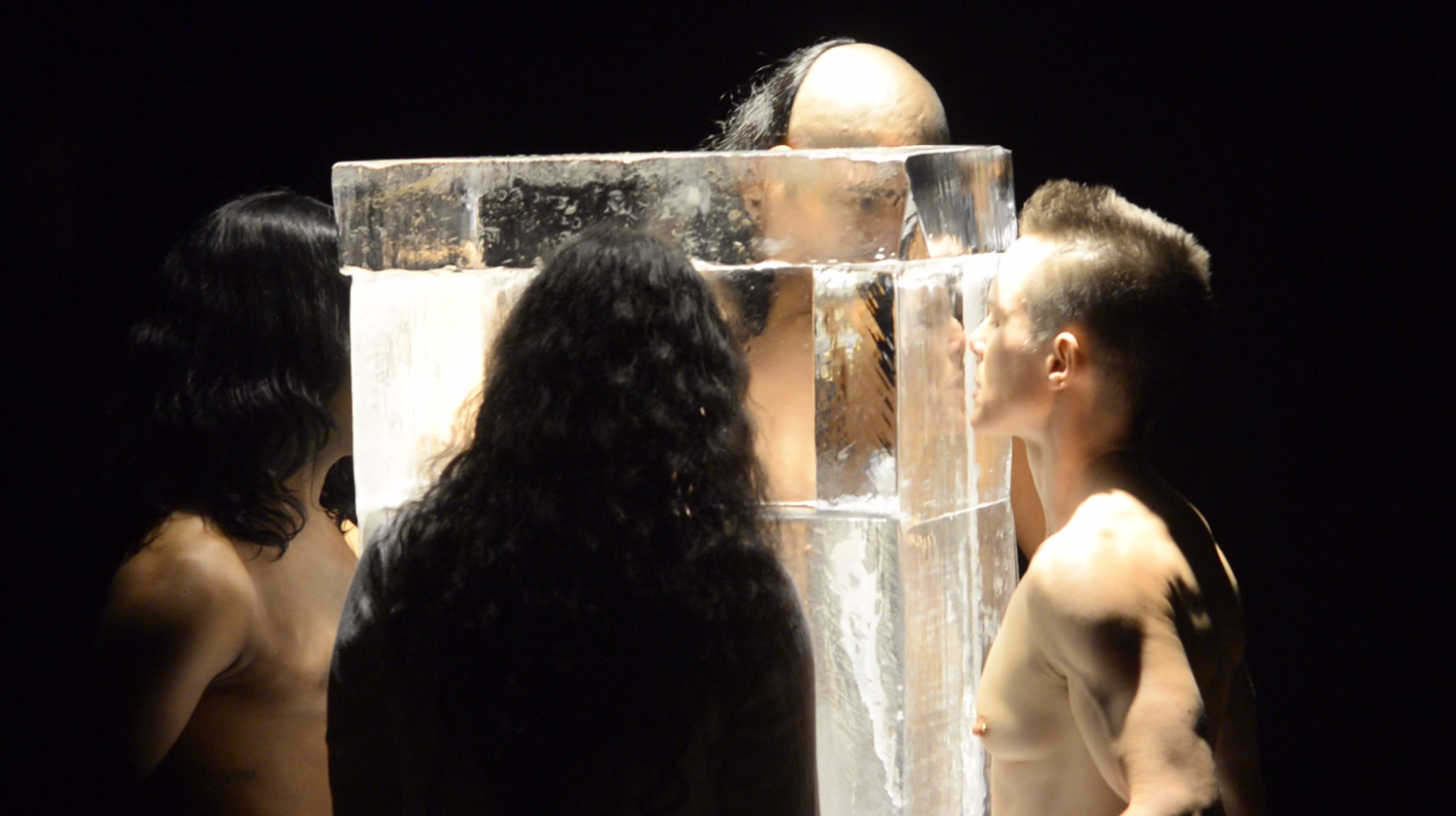 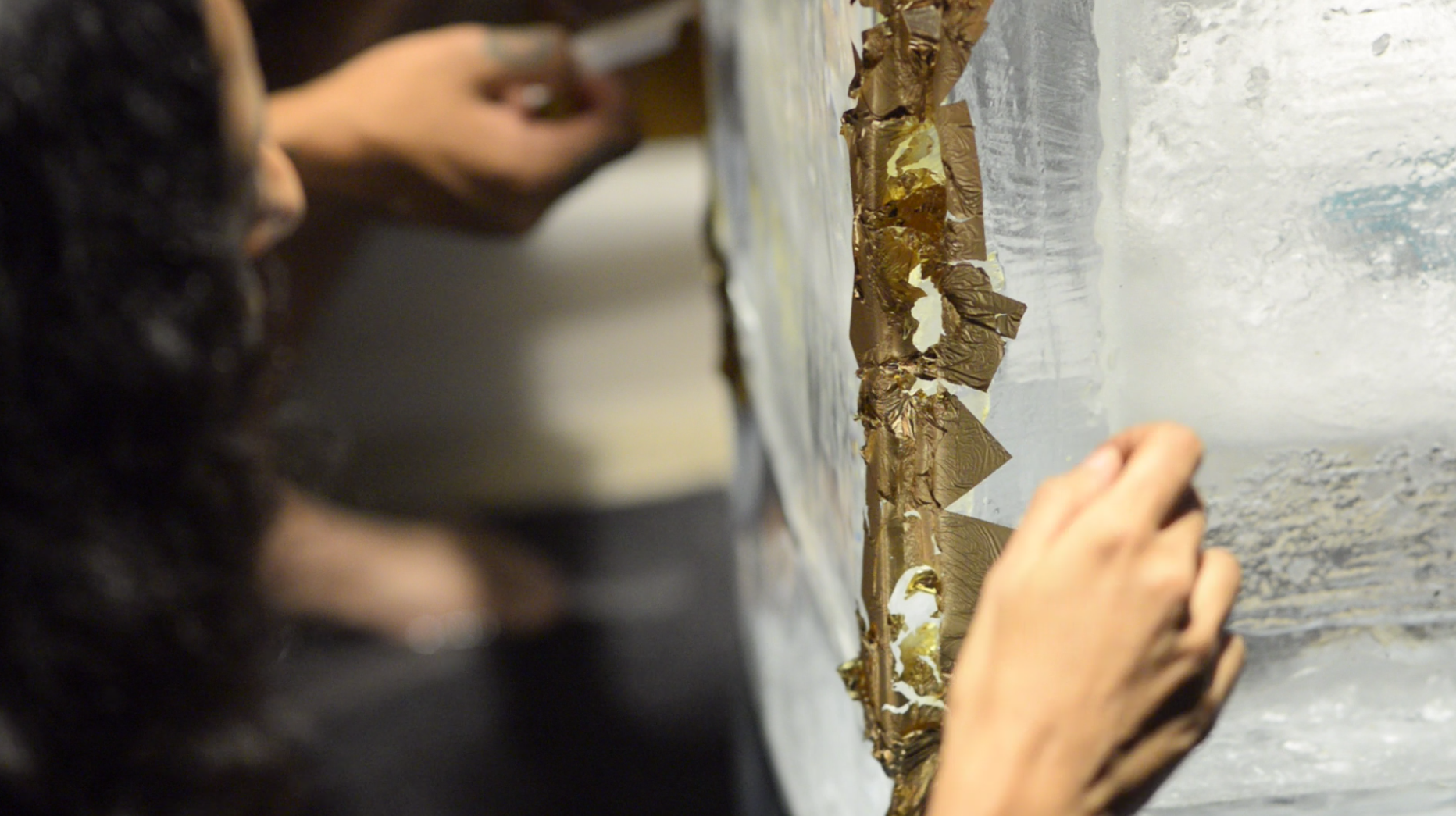 “The force and union of these trans*, queer, and otherwise minoritized artists was a powerful collective coming together against systemic forms of oppression.”

Rafa Esparza is a queer Chicano artist who uses performance and installation and isinspired by his relationship to colonization, the need to unearth, question, interrogate,and explore historical myths which in turn inform constructs regarding identity, land, memory, labor and kinship. 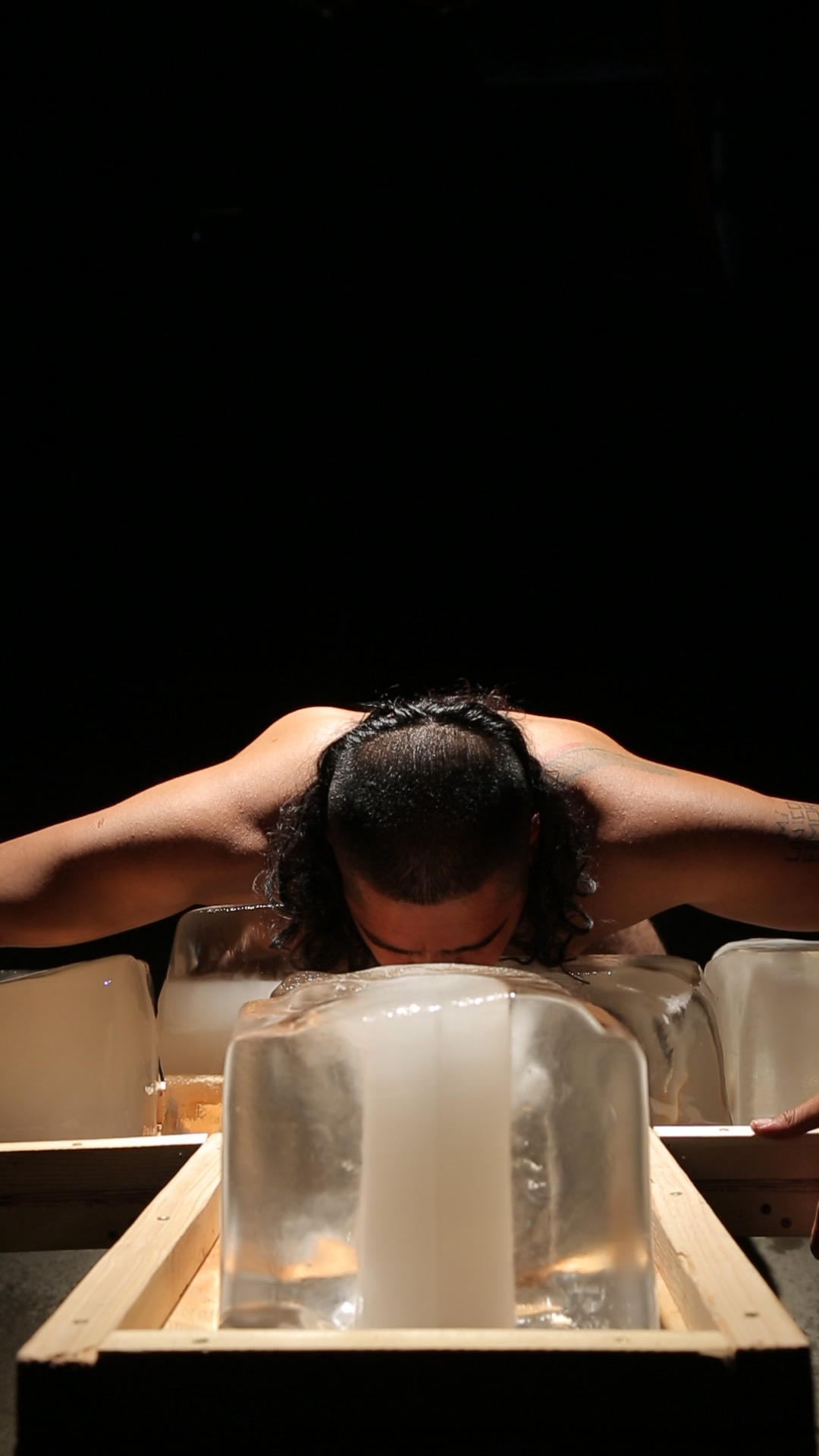 “We are the people who leap in the dark, we are the people on the knees of the gods. In our very flesh, (r)evolution works out the clash of cultures. It makes us crazy constantly, but if the center holds, we’ve made some kind of evolutionary step forward. Nuestra alma el trabajo, the opus, the great alchemical work; spiritual mestizaje, a “morphogenesis,” an inevitable unfolding. We have become the quickening serpent movement. Indigenous like corn, like corn, the mestiza is a product of crossbreeding, designed for preservation under a variety of conditions. Like an ear of corn—a female seed-bearing organ—the mestiza is tenacious, tightly wrapped in the husks of her culture. Like kernels she clings to the cob; with thick stalks and strong brace roots, she holds tight to the earth—SHE WILL SURVIVE THE CROSSROADS.”
-Gloria Anzaldua

In this passage Anzaldua speaks of the intersections, the crossroads but is also referring to a cuerpx cruzadx, a crossed body. Catholicism/ Christianity/ patriarchy remains a rajada, a cut que nos cruzo, that crossed us- that is most palpable in our worlds and in our bodies still to this day. The affects of patriarchy, genocide, and colonization are everywhere around us. Queer, Trans, Womxn, POC, the poor, we all know those affects intimately. My body covets a world absent of the violence that came riding in on horseback waving it's flags emblazoned with crosses 500+ years ago.”
–Rafa Esparza

Keijaun Thomas’s work investigates the histories, symbols, and images that construct notions of Black identity within black personhood. Thomas examines, deconstructs, and reconstructs notions of visibility, hyper-visibility, passing, trespassing, eroticized, and marginalized representations of the black body in relation to disposable labor, domestic service, and notions of thingness amongst materials addressing blackness outside of a codependent, binary structure of existence. 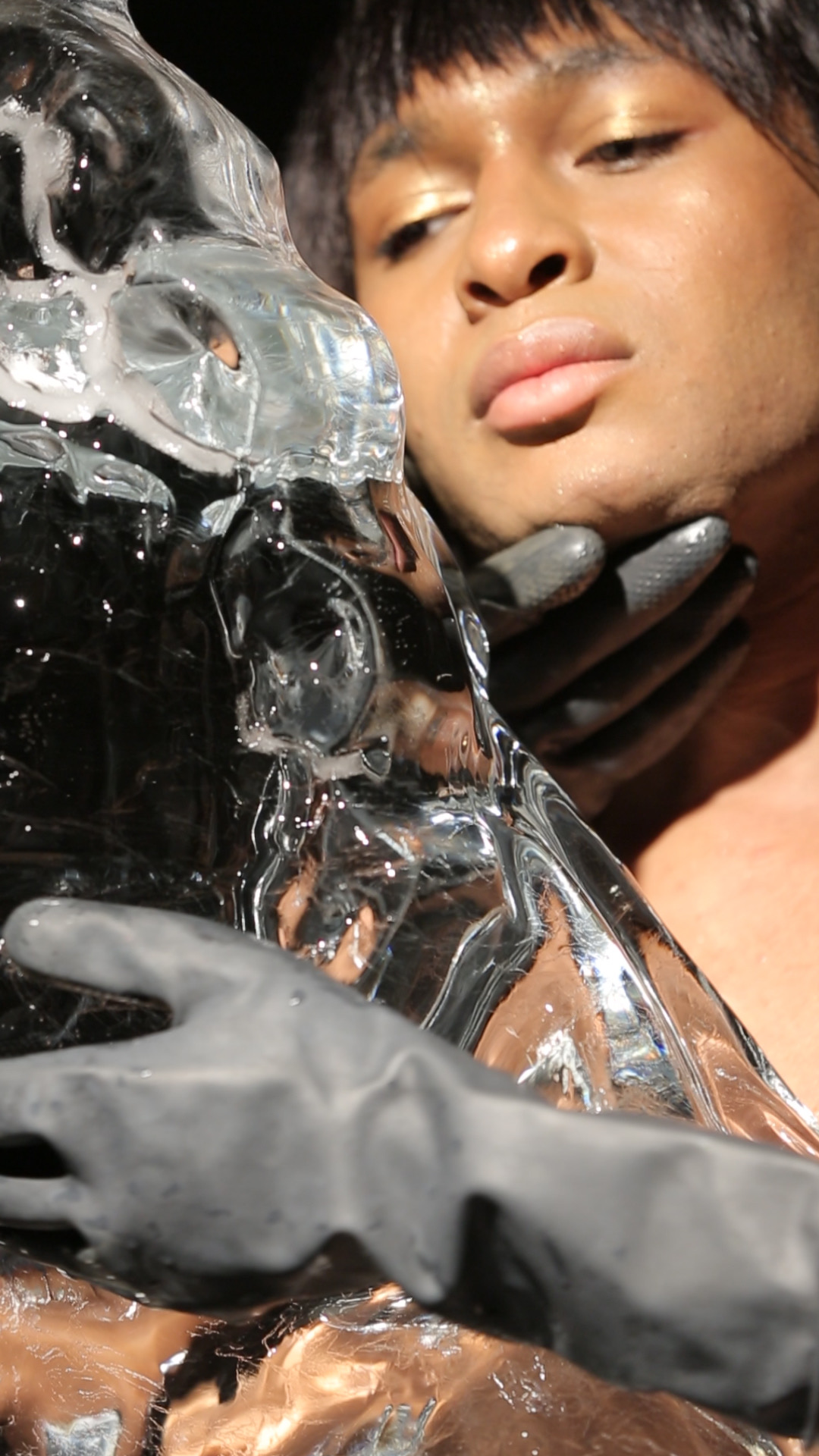 “Sometimes I watch the wetness fall. Slowly and gracefully. I watch the water set and caress my skin. She holds me like my mother did. I’ve watched my grandmother work with dish water, rags and towels doing hospitality and care work her entire life. I’ve watched my mother boil hot water in pots on the stove top to make a bath. I’ve washed my own body and imagined our swimming bodies in bodies of water much larger than myself— bodies of scars and stars. I’ve held the pleasures and pressures of dependency, care and support in the palms of my hands. I’ve lived with the endurance and intimacy that care work demands of those expected to perform it— predominantly black women, black femmes/ trans women and marginalized people of color. Water is strong like the moonlight is gentle. I think about my ancestry and how we got to these shores. I think about Yemaya, the Yorùbá Orisha or Goddess of the living Ocean, considered the mother of all bodies of water— both “motherly, strongly protective, and cares deeply for all Her children, comforting them and cleansing them of sorrow.”  I think about the immense labor and care work demanded of our bodies, rock hard, icy sweat dripping. Cleaned, rinsed, baptized. Scrubbing, washing and rebirth. Reclaimed, purified, filled with light, the surface so clear, we gleam.”
-Kiejaun Thomas 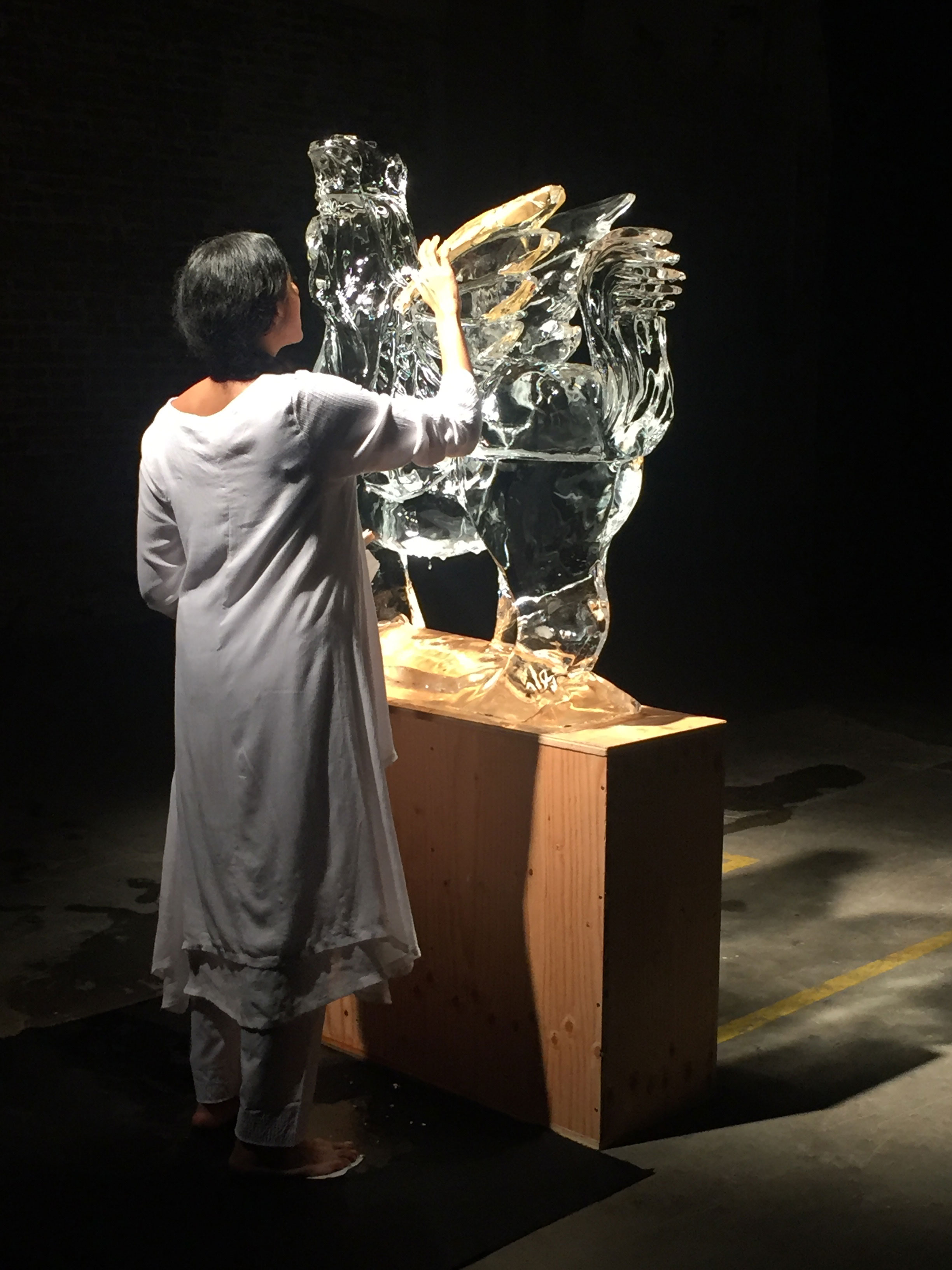 “The Buraq has been in my mind’s eye since I was a child. She is a controversial figure, part woman, part horse, and part wing. She is not spoken of in the Quran explicitly, but lives strong in folklore and indigenous mythology, sites of resistance to fundamentalism and orthodoxy, sites of richness, imagination and power in counterpoint to austerity and control. I grew up in a home that did not permit iconography, so my choice to become an “artist” has been torn with conflict, both external and internal, and I feel so often paralyzed in my longing to make things. In trying to gild her before she disappears, I think of our very human desire to fix what is divine and unfixable, the simultaneous dreams and limits of alchemy, and the inevitable failure in this attempt is the gesture towards a devotional act, the only kind that makes sense to me.”
- Fanna 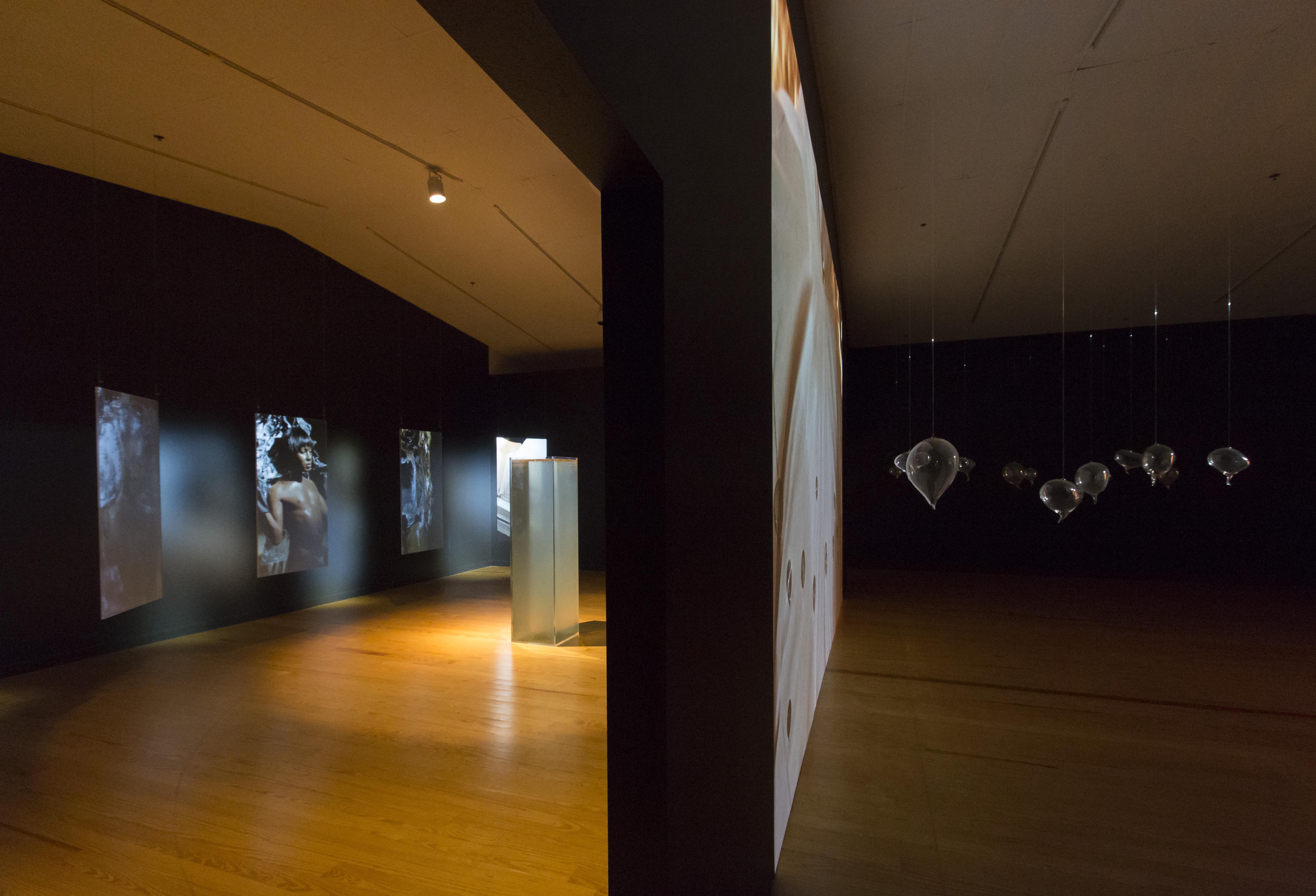 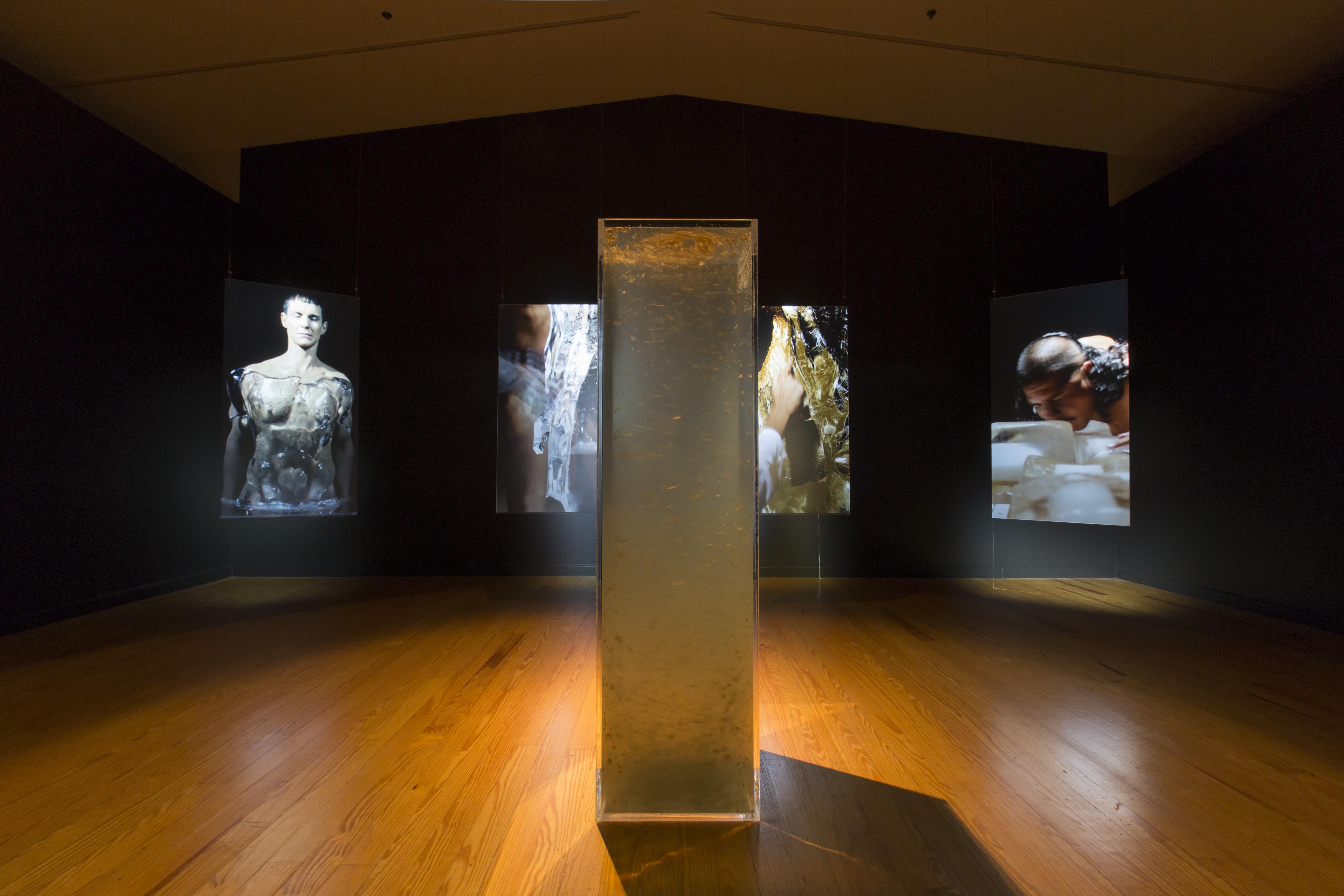