PISSED is a minimalist glass cube containing 200 gallons of urine.

This tank of glowing urine manifests what may seem abstract in discussion: the physical burden placed on an individual body when bathroom access is restricted by discriminatory policy. PISSED is a collection of all the liquid excreted by the artist in the 200 days following the Trump administration’s 2017 rollback of an Obama-era executive order allowing transgender students to use the bathroom matching their chosen gender identities. 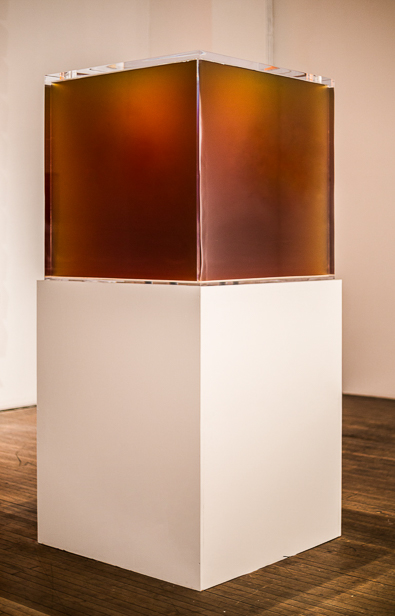 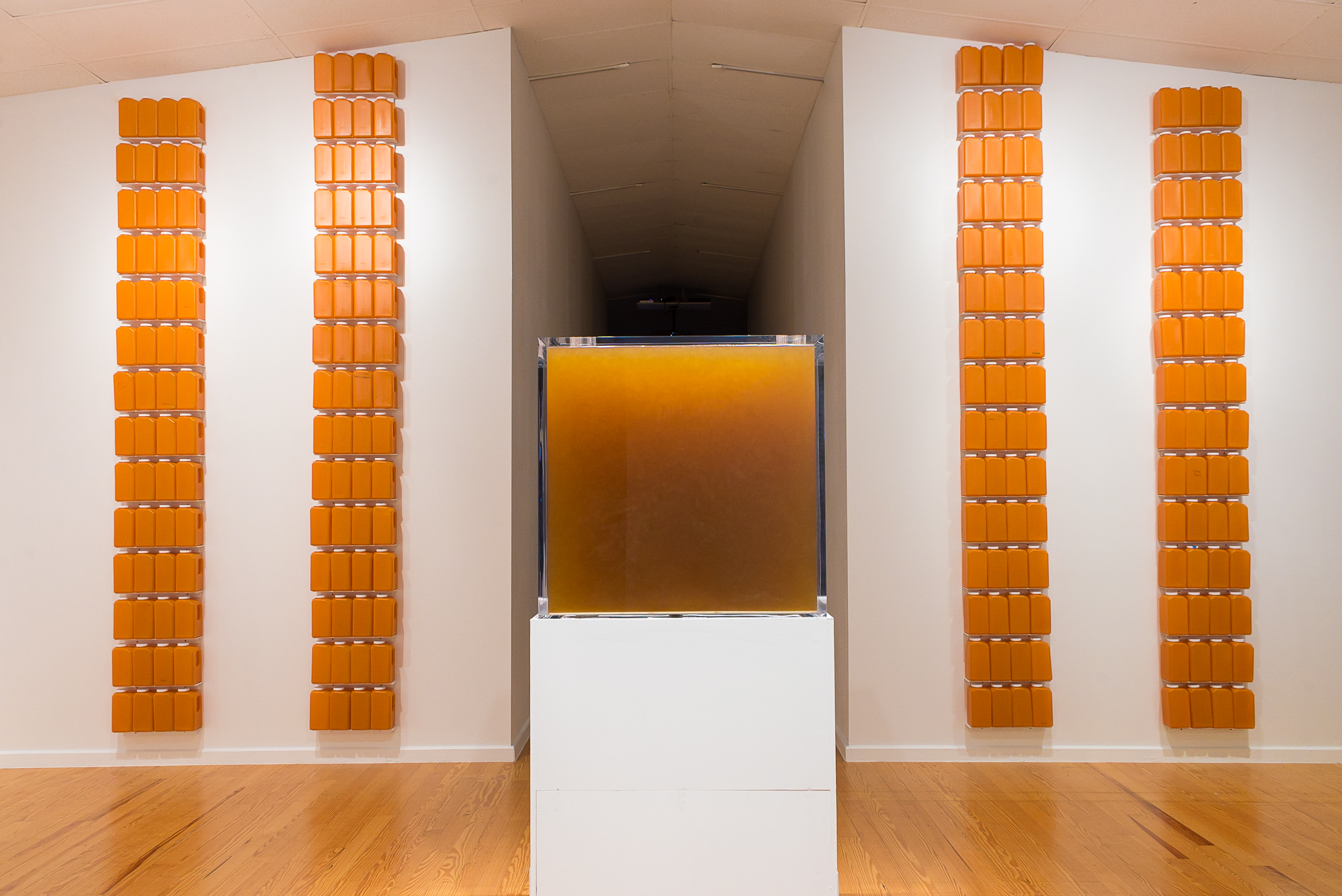 Fountain marked the final two hours of a 4,800 hour performance.

At the close of 200 days of collecting every drop of their urine, Cassils invited the audience to witness the final acts that would complete the durational sculpture PISSED. Standing on a platform above the audience in front of a grid of 255 orange medical bottles marked with the date of urine capture, the artist shared the deeply human acts of standing, drinking, and urinating. 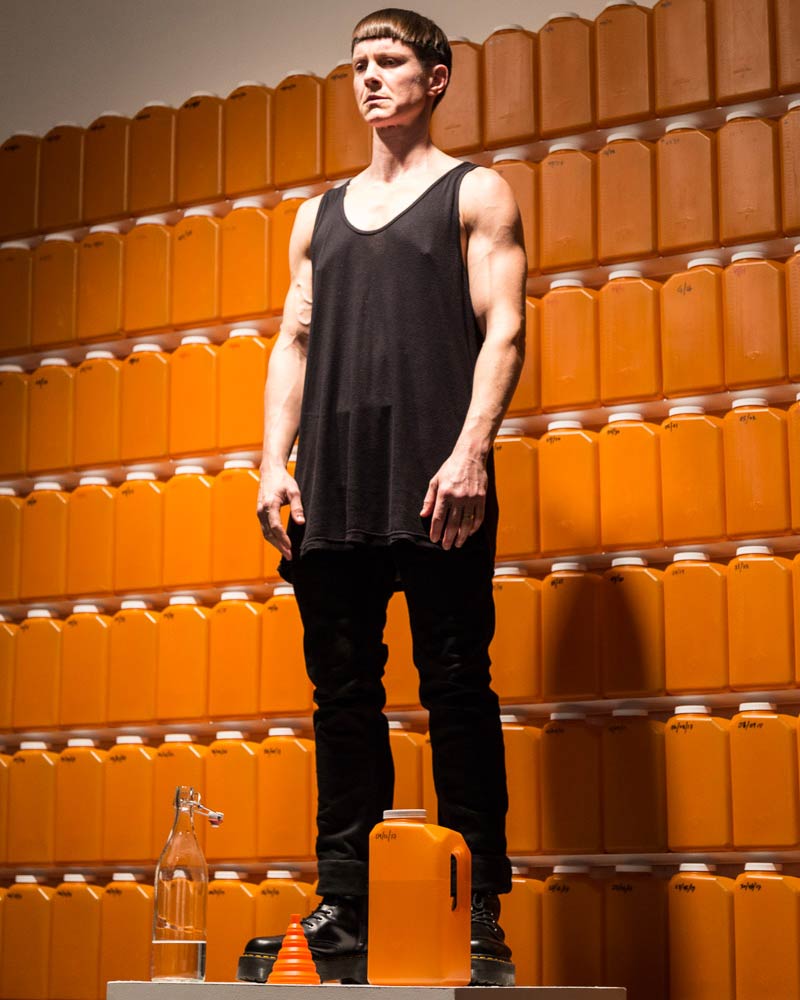 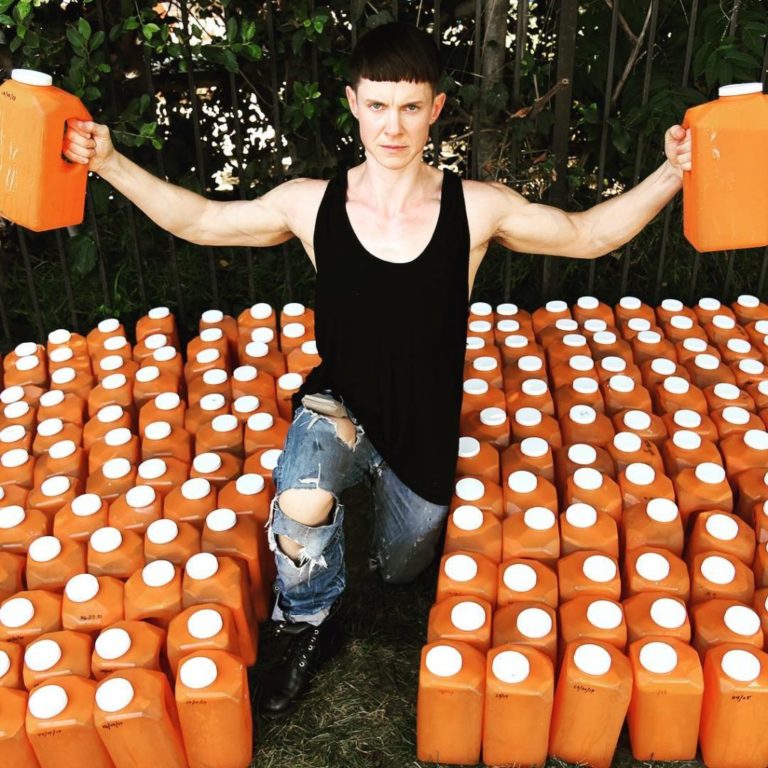 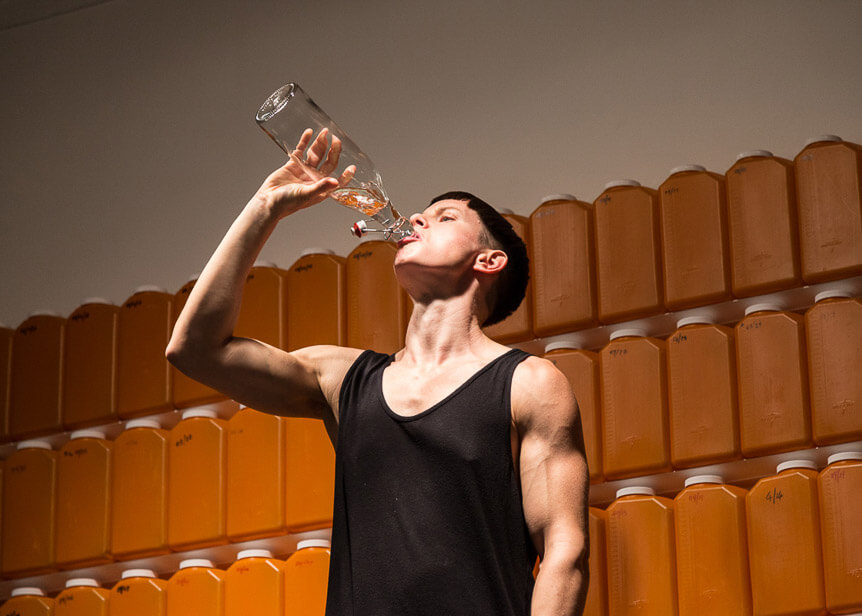 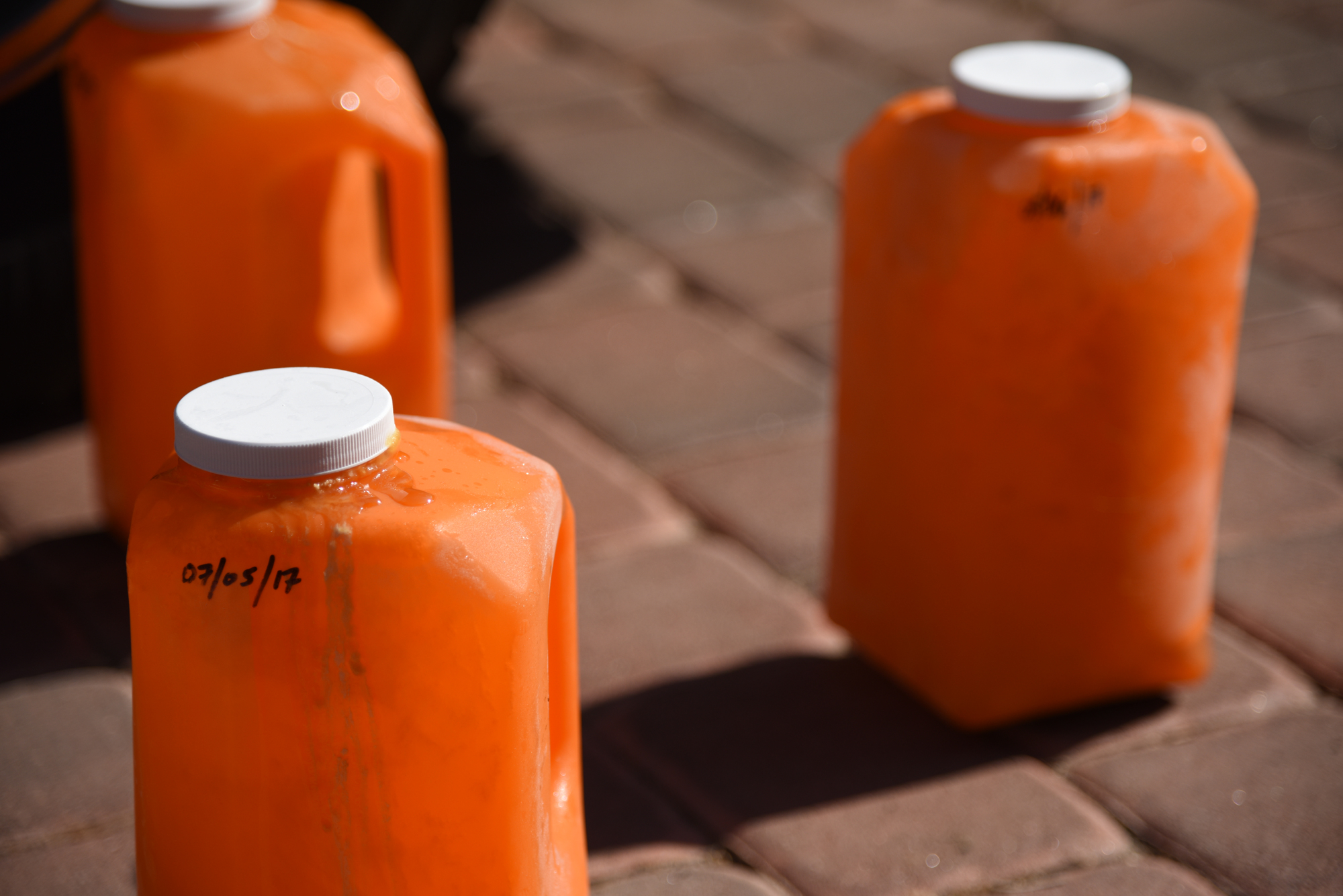 “Cassils’ work may speak in violence, confinement, and condemnation, but ultimately, their art is about transforming those experiences into something useful—like turning urine into sculpture. They believe that “as much as we need rituals for anger, we need rituals for healing, and rituals for witnessing each other’s pain.”

PISSED’s audio track features the oral arguments from the case of Gavin Grimm, the transgender male teen who became the face of transgender rights in his fight to use the boys' bathroom in a school in Virginia.

In the fall of 2017, Grimm’s case was accepted, and shortly thereafter rejected, by the Supreme Court— thus staying a decision by the Fourth Circuit Court of Appeals which prevents Gavin from using the boys bathroom to this day. Over the two hours of the audio composition, the audience hears the ignorance of bible-quoting adults juxtaposed with the crisp, simple clarity of Gavin’s plea to pee against a sonic landscape of water flowing and flushing.

This tank of glowing urine manifests what may seem abstract in discussion: the physical burden placed on an individual body when bathroom access is restricted by discriminatory policy. 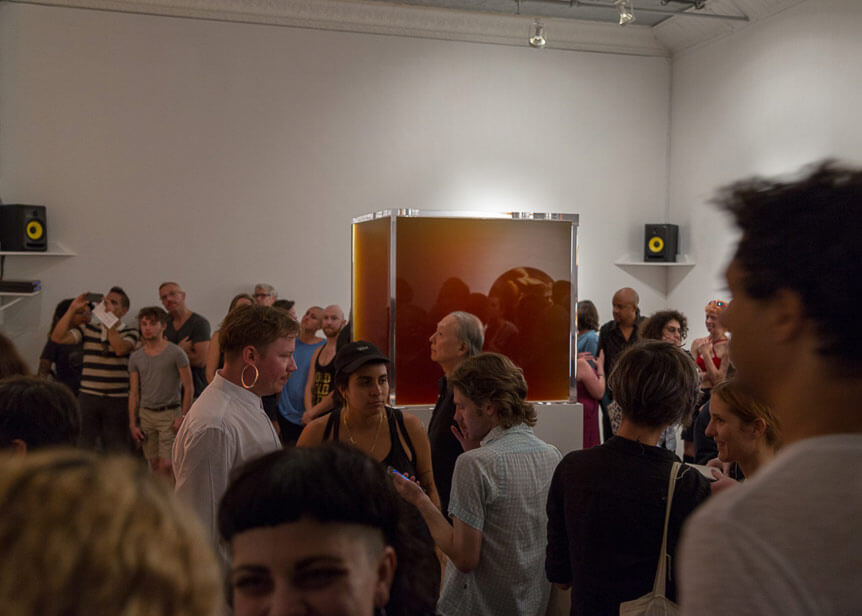 The Alchemic suite of photographs was created in collaboration with Robin Black. In Alchemic, Cassils presents their gold-painted, muscular body as a philosophical homage to Robert Mapplethorpe’s classically beautiful Male Nudes and Statuary series. The group of photographs was made to accompany Cassils’ PISSED sculpture.

These photos are face mounted onto two inches of polished plexi which draw an aesthetic relationship between the tank of bodily fluid and the images. Formally the plexi also functions as a magnifying lens, while also referencing a scientific petri dish, pointing to the study and scrutiny of transgender bodies. Pairing the gilded body against a vat of urine also poses the questions: Whose lives are considered precious and valued and whose are deemed disposable? 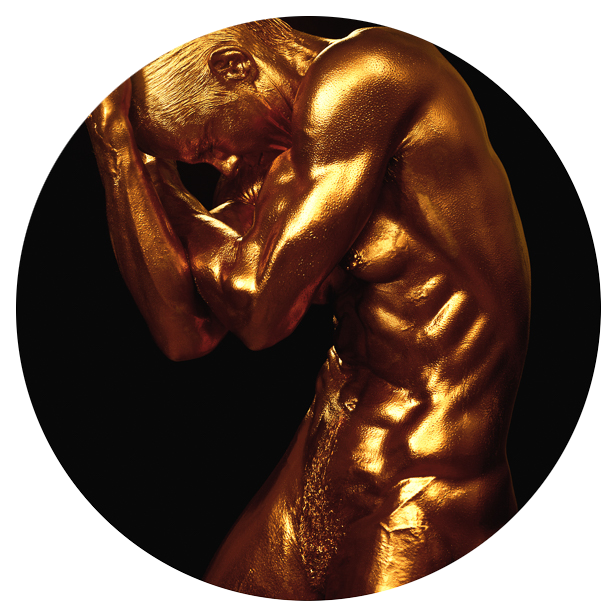 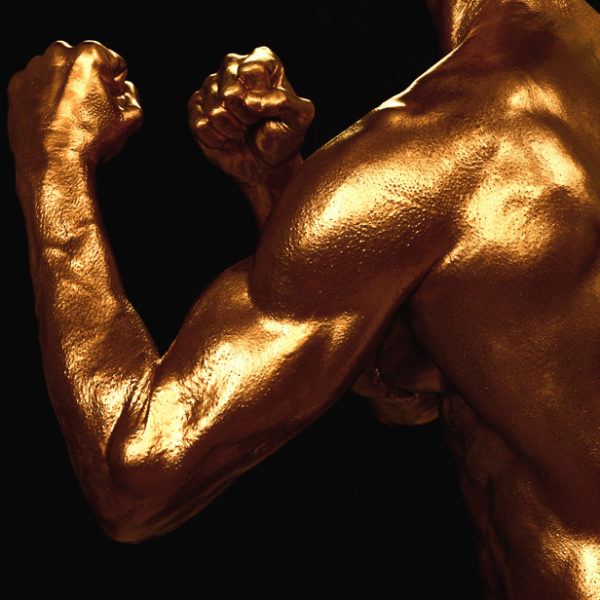 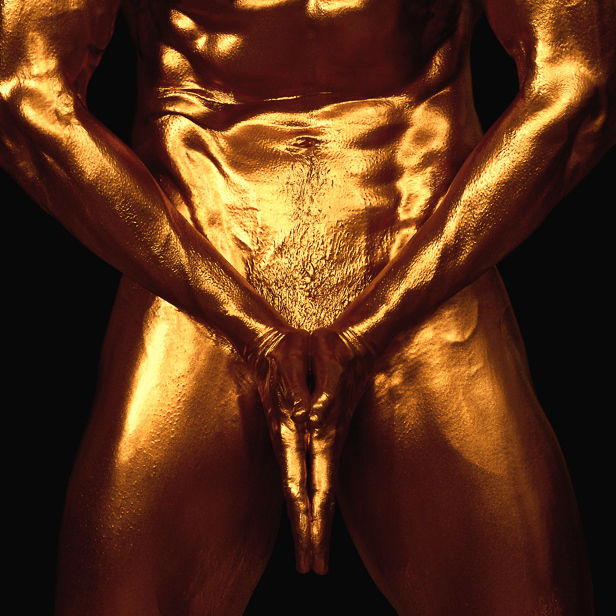 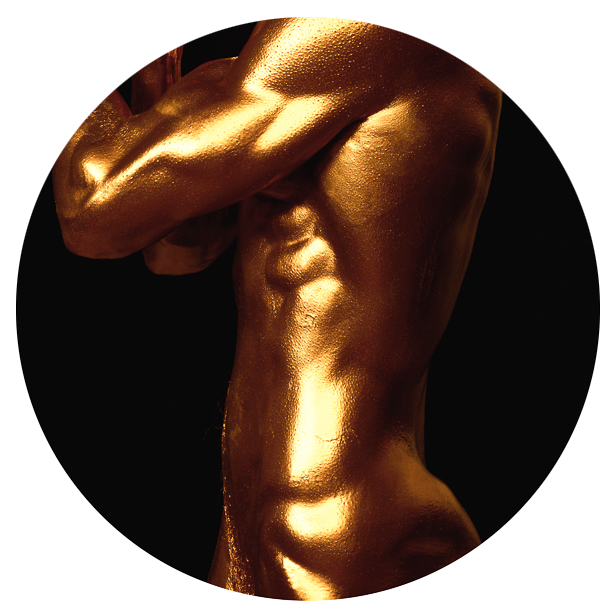 “Cassils is positing their own body—painted gold for dramatic and sartorial effect— and creative practice in the same slippery authorship position which Mapplethorpe frequently occupied: the artistic switch who is both top and bottom, auteur and object, giver and receiver of gaze.”